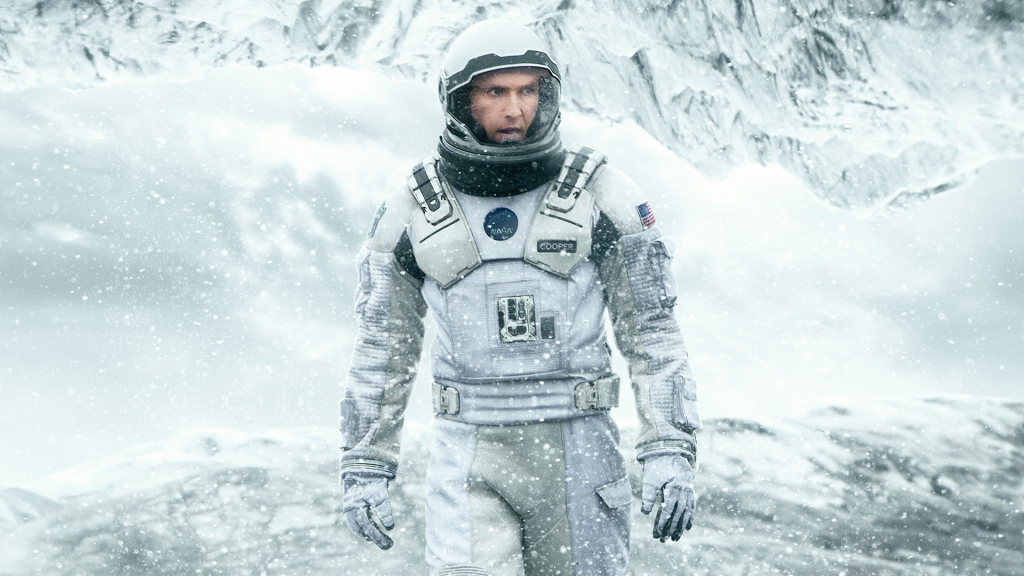 Christopher Nolan‘s Interstellar may not only be his most personal film, but perhaps his best directorial effort to date and it may be enough to garner him his very first Best Director nomination from The Academy.

The film centers around widowed father of two, Cooper (Matthew McConaughey) a former NASA test pilot turned farmer who is tasked to pilot one last mission for the space agency. In doing so he must leave behind his children not knowing if he would ever see them again.

Without getting into much detail and not give away some key moments in the film, simply put this film is as much a film of a man striving to survive as it is a story about a father’s love for his children. But the true surprise of this film was how much it was also a love letter to the Stanley Kubrick classic, 2001: A Space Odyssey.

The two films draw great parallels between one another. Whether it’s the haunting score by Hans Zimmer (which must have been inspired by Alex North’s work), HAL 9000’S fully realized A.I. cousins CASE (voiced by Josh Stewart) & TARS (voiced by Bill Irwin), or the hopes of making contact with other forms of life. And as much as 2001 came on the height of the NASA program just as man was about to land on the moon, Nolan’s film perfectly shadows NASA’s space program which recently faced great financial adversity and was even briefly shutdown. Regardless, there’s no question that man will always look to the stars and dream of fully exploring the universe, a theme both films share.

Just back from Interstellar. Never in my life has a movie taken me on a roller-coaster ride like that.

The first half of this LOOONNGGGGGG ass movie requires no alcohol. It’s an enjoyable highly believable ride. The second half of this movie requires you to be within 2 ft of hard liquor at all times. You must POUND the liquor down your throat to prevent your face from melting and your mind from exploding. What in the fuck was the director thinking? It was like watching the beginning of a National Geographic Science film with a Japanimation ending. I could even look past the plot holes in the beginning, but at the 1:30 minute mark I started hearing my dad’s voice – “OHHHH THIS A DOOZY THAT REQUIRES MORE BEER.”

What in the fuck was up with the fucking robots? All this technology and they walking around with lame ass robots that look like my uncle’s Domino set. Seeing that shit try and ‘walk’ on ice covered rugged terrain had my wife doubled over laughing with tears coming out of her eyes. How did they go from the Mars Rover to that shit? Why not just strap a battery pack on a fucking 1987 SLINKO toy and have it fall down the terrain. That would have made a better robot.

Also, not to give away any hardcore spoilers, but Hollywood has beaten this formula to DEATH. Every movie where they have “highly” trained people doing something, someone is going to snap and fuck everything up. It’s almost like when the Federal agency puts the team together, whether it be NASA, The Navy, The Army, etc……someone in the unit is going to go bat shit crazy. THIS SHIT ALWAYS HAPPENS. It’s like my dad use to say about ghost/horror movies – “The party don’t start until you see a white broad in a basement by herself with a flickering candle.” Who in the fuck is reading over the psychological profiles of the candidates? Stevie Wonder?

Doctor: “Let’s see here, Jeffrey the candidate, says in his profile that he snaps under pressure, urinates his pants when scared, enjoys back stabbing coworkers, and was locked up his entire childhood in a insane asylum. OH SHIT HE’S OUR GUY FOR THE MISSION! PERFECT CANDIDATE!”

Get the fuck outta here!

So Interstellar – if you have half a day to waste and have a large Popeyes cup loaded with either A) Southern Comfort or B) Jack Daniels, then I highly recommend this movie.

My wife’s thoughts on the film were a little more harsh – “it was like taking a gun shot wound to the face.”

PS: all black people die in movies….even in the future.

Homages to the great sci-fi stories of the past.

You will definitely want to talk about the film after you’ve seen it.

It had to end.